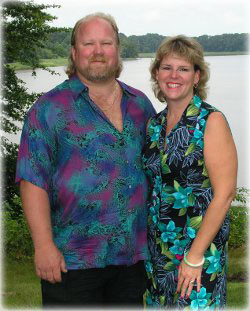 There is so much to tell yet so little space.  Suffice it to say, Carolyn & Steve love to do just about anything outdoors...and together. Carolyn is a small-business marketing consultant/writer and was also a part-time professor of marketing at Johns Hopkins University and Loyola College since 1990. Steve has an entrepreneurial track record as well, which includes auto-body repair and construction,as well as management of their boarding barn.  What a perfect pair - he builds it and she markets it.

Known among their friends for "filling a day," Steve and Carolyn would often get up on a weekend, go for an early morning horseback ride in the state park, hop on the motorcycle for an afternoon cruise and lunch, and then launch their little 18' boat in time for sunset on the Chesapeake Bay.  Their vacations usually involved outdoor activities like scuba, hiking, driving tours, and listening to live music in cafes near and far.  In their spare time, they managed to run their businesses, spend time with friends (they love to entertain) and spend time with their daughter, Mary.

In June, 2004, their world turned upside down, sort of.  That's when Carolyn and Steve visited Vancouver so she could give a seminar at the annual convention for the Association of Teleservices International (ATSI).  Impressed with Vancouver and how clean and friendly everyone is, despite not being very city-oriented, Steve and Carolyn asked a local gentleman for recommendations for the rest of their stay.  He suggested Vancouver Island and explained how the ferry system worked.  The next day, they were Island bound and mesmerized by the ferry ride alone, not knowing what would be next.

Once on the Island, they headed north. They managed, in just a few extra days, to visit Tofino and Ucluelet on the Island's west coast (surfer's love it here), flew to an adjacent island to soak in the hot springs (after sighting whales while in flight), and went north to Campbell River.  When they had to go home, they knew they'd come back.  In all their years of domestic and international travel, neither had ever felt so sad to leave a place. -- So, they came back.

In October 2004, on their third wedding anniversary (coincidentally), the couple signed the contract for their slice of paradise in the heart of Vancouver Island's Comox Valley.

Now the rest is history.  After months of work on the immigration front, in addition to coordinating the lot clearing and construction of their new home from 3000 miles away, the Eagles Have Landed.

Wanting to share their love of this place and their Canadian friends, Steve & Carolyn decided to open Two Eagles Lodge believing that "Strangers Are Just Friends You Haven’t Met Yet."

Proud Member of the
following organizations:

Comox Valley Chamber of Commerce
Discover Comox Valley Destination Marketing Committee
Comox Valley B&B Association
Horse Council of BC
For information, please email: StayWithUs@TwoEaglesLodge.com or
call Carolyn at 410-461-9399 (from the US) or 250-335-2342.